Are you investing in Bitcoin? It's certainly a buzzword at the moment.

You can't spend much time on the internet without hearing the words "Bitcoin" or "cryptocurrency" right now...which is one of the reasons why I won't be investing in it. 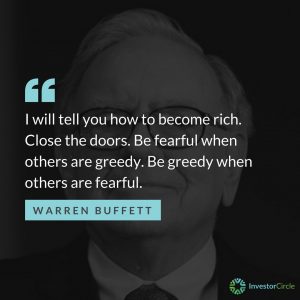 But then, hindsight is a wonderful thing.

I've seen heated discussions between DJs and plasterers on my Facebook, bringing up things like expected market cap. and how it's going to change the world.

And while I love that it's raising awareness of investing...something we're very keen to do at InvestorCircle...I can see that the promise of wealth and gains from these investments is overshadowing the risk factors. So much, in fact, that the risks aren't even really being considered for many.

So let me talk you through my thoughts...

I'll add that the following words are simply my opinion. I don't claim to know what's going to happen and anybody that does should be heeded with caution.

This is the first of my concerns: speculation.

One of our Core Values at InvestorCircle is to always be actively minimising risks in any investment.

While it's true that there are risks to absolutely any investment, some risks can be managed from the outset. This is explained in a lot more detail in this article.

When you're investing on the hope of what a market will do, you are essentially gambling. As mentioned above, absolutely nobody can know what is going to happen to the market.

Of course, we can make educated guesses based on the historical precedents of a market but even then, you can never be too sure.

In property investing, we have many years of data as to how the market works. There is a continual upwards average trend in the UK because we have a finite amount of land and an ever-growing population. The demand is always present and thus the value will typically go upwards.

It should be noted that there are extended periods where the property market drops like the 2008 crash but we negate this risk by ensuring that we have great returns from positive monthly rent cash-flow so that, in essence, it doesn't really matter what the market is doing. Over time we can be pretty confident that it will go up but if it goes down we can afford to hold because we're making decent monthly profit.

You would only lose if you decided to sell when the market dropped.

With speculative investments, especially such new ones as cryptocurrency, anyone's guess is as good as anyone else's.

The point is: nobody has a crystal ball.

Some people may talk with confidence but in reality nobody can know.

Investing In Bitcoin, Is It A Bubble?

This is the definition of a bubble:

An economic bubble or asset bubble (sometimes also referred to as a speculative bubble, a market bubble, a price bubble, a financial bubble, a speculative mania, or a balloon) is trade in an asset at a price or price range that strongly exceeds the asset's intrinsic value.

Trying to establish the intrinsic value of a cryptocurrency isn't exactly easy.

In my opinion the intrinsic value is likely to be reflected by the actual real world application of the currency.

At the moment, that's not very much at all.

This is key to understand.

The value of anything comes down to supply and demand.

Bitcoin has a finite supply and currently demand is huge...but why? Nothing has changed in the last year. We haven't all started using it to pay for everything.

Nobody is buying Bitcoin to actually use Bitcoin.

It's a virtuous cycle, if you like...but that massively undermines that real value of it.

This is what makes a bubble a bubble and it's very tempting to get involved because there are a lot of potential gains to be made, especially for the early-adopters.

This isn't far off how a Ponzi scheme works.

The early-adopters win, and often win big, but there will be big losers...and it's likely to be average Joe who got naively sucked into the gold rush.

Sure, the early-adopters win the most in any investment that grows but most investments aren't a bubble and lack this sharp peak that's artificially propped up by greed.

The problem is that it is inevitable that it's going to come crashing back down again, likely to a more realistic and stable value that will eventually be more reflective of its real-world use.

It just takes a loss of confidence or a regulation change and down it comes.

So what is the real world use?

I've heard people talking about how it's going to change and revolutionise the world...it's "decentralised", so it must be amazing.

Unfortunately, while that might sound great as a headline, in reality, it's just not going to be a viable option which is why you won't find many economists getting too excited.

There are two main reasons that we use currency:

Cryptocurrencies have no use for either of the above functions.

One of the main reasons that we actually pay taxes is so that we have to use the government issued currency.

If you think the taxes that you pay go on to fund anything in the budget, you're very much mistaken. That hasn't been the case since we left the gold standard back in 1931.

Government issued currency in a 'fiat system' is infinite.

They can create as much as they like (although there are real-world consequences to adding too much or too little). The fiscal budget is simply numbers typed into existence and deposited into accounts as required.

The taxes you pay simply get deleted from the system once you have paid them. The government removes them from the economy entirely as they're just fictional items and they can do that. Taxes have absolutely nothing to do with the next budget and fund absolutely nothing.

So why do we pay taxes?

Well, if you're a government and want to manage an economy, you need to be in control of the currency. You can decide who pays which taxes and also how much...so your decisions impact behaviour within that country and ultimately the prosperity (if done properly).

In order to control the currency, you must be the only issuer of the currency that is in use...and this is done by enforcing that taxes are paid in that currency.

A government would never accept anything other than their issued currency for tax payments as otherwise their currency, and the economy, would collapse (as demonstrated in the Confederate States of America).

So if you were paid in Bitcoin, you would still have to pay taxes in GBP and that value is worked out based on the value of Bitcoin at the time of exchange.

That means that the tax liability rises and falls massively dependent on timing as Bitcoin's price is so incredibly unstable.

Additionally, if the value of Bitcoin increases, you'd pay capital gains tax on that too.

It's just not a sensible mode of operation...which leads me on to the next point.

As Bitcoin's value is rapidly fluctuating, it's clearly not a stable means of exchange.

Explained above, people aren't investing in Bitcoin to use them...they're buying them because they're hoping that they're going to go up in value.

That isn't a working currency. That's a commodity.

But more importantly than that, the actual supply of Bitcoin is finite. It's capped at 21 million.

This is akin to the gold standard which we left a long time ago which was when one issued currency unit was pegged to an equivalent amount in gold.

If a monetary supply is fixed, it can't keep up with a growing economy.

As the economy outpaces the money supply, prices are pushed down as we try to support purchasing more with the same amount of currency.

This is called a currency deflation and it can kick off a very nasty recession.

Bitcoin is set up to deflate and it is therefore set up to fail as a currency.

Bitcoin takes away the control of the monetary supply which we need to match the needs of a changing economy. It just can't work as a practical currency.

While I sound all doom and gloom, one thing that I do agree with is that blockchain technology will have a big impact on our futures. This is the technology behind how these cryptocurrencies work and it's incredibly smart.

Blockchain's use isn't limited to cryptocurrencies. It has an array of future potential benefits.

The problem is that I feel that this potential is causing people to validate cryptocurrency as a good investment.

There is a considerable difference between something potentially being beneficial in the future and what I would define as a sound investment.

Sure, a lot of people have made good money from Bitcoin, especially the early adopters...and I've no doubt more people will continue to make money...

But I'm confident that this bubble is going to burst at some point based on everything I've outlined above...but we just don't know when.

Some people in casinos make a lot of money, some people lose big time. The point is, investing in Bitcoin is gambling.

And gambling does not a good investment make.

You could win big but the risk of loss is just as large.

You want to maximise returns...but you want to actively minimize risk. That's what makes a good investment.

Remember: you can't control the markets.

I feel that the stories of future revolution and wishful thinking is subconscious justification of the temptation and desire for potential gains by the inexperienced.

But then again, I've never been a gambler!

Investments aren't supposed to be exciting...if that's what you want, you might actually have more luck in a casino.

Having the freedom to take entrepreneurial chances safe in the knowledge that you are getting paid by your assets engenders a unique atmosphere and a boom in creativity. A growth in entrepreneurship leads to innovation and ultimately prosperity across the board.

Our ultimate purpose is to remove as many barriers as possible to enable this to happen.